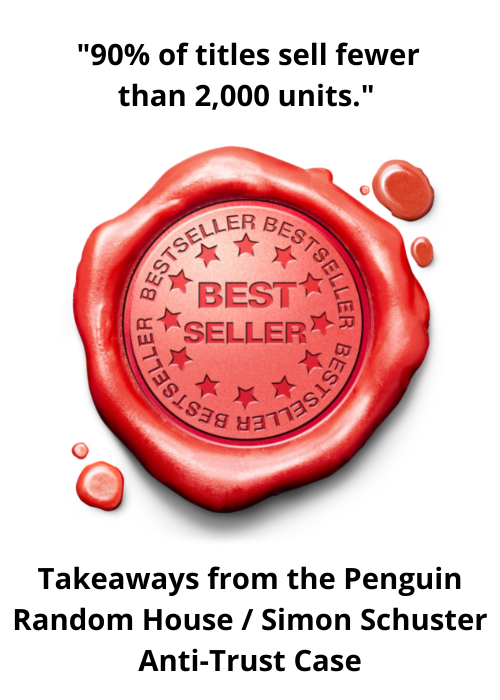 Book sales statistics – how many copies makes a bestseller? How many books actually get sold?

Books sales statistics are mired in secrecy, illusion and ignorance which is why a twitter thread by American author April Henry spurred thousands of tweets.

April had been following the Penguin Random House/Simon Schuster Anti-Trust hearing. This case has the US government looking into what a merger of these two publishing behemoths would mean for authors, readers and the publishing and bookselling sector.

The statistics being quoted in the trial are eye-opening for many authors who find it difficult to gauge how many copies of their book they might sell, and/or, if the number they do sell is any good.

But here’s the thing…there is no clear way to measure how successful a book is (and getting an ‘Amazon Bestseller’ tag in an obscure category on any given day is easy to game so is irrelevant). One of the measurement tools the industry uses, BookScan, doesn’t track all bookstore and online bookstore sales, and doesn’t include ebooks, audiobooks, books sold into libraries or self-published books sold direct by authors from their websites and at events, so the data isn’t 100%.

It’s also not clear if the numbers stated in the case relate to lifetime sales or yearly sales, or if the stats refer to each ISBN number (eg: if a book is published in paperback, ebook, hardcover and large print…the book would have 4 different ISBN numbers, thus diluting the overall sales of the same work when divided by 4).

There is a good article by Lincoln Michel on Countercraft titled ‘No, Most Books Don’t Sell Only a Dozen Copies‘ which delves into all the different ways book sales data can be compiled and confused. However, though they might sell more than a dozen copies, it does seem fairly likely that 90% of books published in the USA sell less than 2,000 copies in a lifetime.

Yay! That means four of my five books are in the top 10% of success stories (even though Australia is a much smaller market than the US), with my latest one set to get there based on current rate of sales.

But what does it mean for you as an author? Will your book be in the top 10% of success stories…or in the much larger cohort of 90% that sell less…often much less…than 2,000 copies? And what were your aims for your book anyway, as for some people, it’s not large numbers that actually matter.

In an article published by The Conversation, ‘The entire industry is based on hunches’: is Australian publishing an art, a science or a gamble? Katherine Day, author and Lecturer, Publishing, The University of Melbourne interviews Australian publishers about advances, book sales and highlights that as many as half the books published won’t make money for the publisher…and, it seems, when signing a book, they never know which half it will end up falling into. Yikes! And people give self-publishing a hard time 😉

So, how can you make an educated guess about the potential sales for your book? There’s a chapter in Look – It’s Your Book! all about the ways you can do your research on this. It’s crucial data to know as it will affect your print run and marketing plans.

And here’s something else that has come out of the Penguin Random House and Simon & Schuster case: Penguin Random House said their total marketing spend was about $55 million on $2.7 billion worth of sales. Most of this going towards promoting the intended bestsellers (ie: the ones they paid out a big advance on) while the bulk of titles are left to languish. That’s just 2% of revenue spent on marketing!

This is another reason why more and more of the burden of marketing falls on authors. It’s something you need to be prepared to do whether you trad publish or go the indie publishing route.

At the recent publishing workshop I gave at Windsor Library, I highlighted that marketing has become a major responsibility for authors. As you can imagine, the message wasn’t embraced by many of the writers. . And I get that. Writers are often introverts, don’t want to be seen as tall poppies, prefer putting words on a page rather than putting themselves out there. But the success of a book these days is absolutely tied to visibility in the marketplace, which is absolutely tied to marketing (offline and online) and media relations.

In good news…once you get over the idea of having to market yourself and your book, it’s not actually that hard to do! After all, you’ve written your book to help or entertain people – and for them to be able to do that – you need to let them know your book exists. There are lots of tips on how to go about this in Look – It’s Your Book! too, as it’s not a writing craft book, but a book about the commercial realties authors – both trad and self-published – face…and can embrace.

UPDATE: In response to Lincoln Michel’s Countercraft thread on Substack, Kristen McLean, lead analyst at NPD Bookscan replied with some great clarity and book sales statistics here. Top takeaways from her analysis being:

NB: Some of these books may not have been out for the entire 12 months and may have been released in the last month’s of the year year, but it still tells us that massive sales of over  100,000 copies or more is limited to a paltry 0.4% or 163 books sold of the tens of thousands of books released by the major publishing houses.